PLASMODIASIS: WHAT YOU SHOULD KNOW?

Plasmodiasis is a term that could be referred to a disorder of parasitic protozoan that is responsible for the breaking down of red blood cell  that gives rise to an infectious blood in the living system.
This parasitic protozoan is called the plasmodium.

The plasmodium thus released the sporozoites  and the merozoites into the blood stream and then transported to the liver and thus reduces the potency of the immune system.

Malaria is a disease caused by a one-celled parasite known as Plasmodium. The parasite is transmitted to humans by the bite of the female Anopheles mosquito.
The Plasmodium parasite spends its life cycle partly in humans and partly in mosquitoes.

(B) Sporozoites travel to the liver. Each sporozoite undergoes asexual reproduction, in which its nucleus splits to form two new cells, called merozoites. (C) Merozoites enter the bloodstream and infect red blood cells.

Some of the newly released merozoites go on to infect other red blood cells. (E) Some merozoites develop into sex cells known as male and female gametocytes. (F) Another mosquito bites the infected human, ingesting the gametocytes.

(G) In the mosquito’s stomach, the gametocytes mature. Male and female gametocytes undergo sexual reproduction, uniting to form a zygote.

The zygote multiplies to form sporozoites, which travel to the mosquito’s salivary glands. (H) If this mosquito bites another human, the cycle begins again.

Plasmodium in Erythrocyte
Erythrocytes, or red blood cells, are the primary carriers of oxygen to the cells and tissues of the body. Malaria parasites enter red blood cells in an infected person’s bloodstream and multiply there, eventually causing the cells to burst. The destruction of the red blood cells causes the episodes of chills and fever characteristic of malaria. 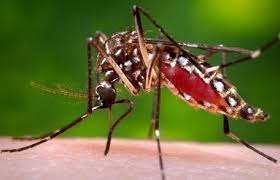 There are approximately 2,000 species of mosquitoes ranging from the tropics to the Arctic Circle and from sea level to mountaintops.

Female mosquitoes have hypodermic mouthparts which enable them to pierce the skin and suck the blood of mammals, birds, reptiles, and other arthropods.

Female mosquitoes of the genus Anopheles are responsible for transmitting the malaria parasite from person to person.
Malaria infection begins when a female mosquito of the Anopheles genus bites a human and injects infectious cells known as sporozoites into the person’s bloodstream.

The sporozoites travel in the bloodstream to the liver, where they multiply for one to two weeks to form cells called merozoites.

As the cells burst, they release merozoites that go on to infect other red blood cells and begin the cycle again.

Some merozoites divide to form gametocytes, immature male and female gametes (cells involved in sexual reproduction). The gametes are involved in transmission of the disease.

When a mosquito bites a human who has malaria, it takes in blood containing Plasmodium gametes.
Inside the mosquito’s stomach, the gametes quickly mature.

The male and female gametes unite to produce a zygote, which multiplies to create thousands of sporozoites.

The sporozoites migrate to the mosquito’s salivary glands. When the mosquito bites another human, the life cycle of the malaria parasite begins again in the human body.

Four species of Plasmodium parasites cause malaria in humans:

Plasmodium falciparum, P. vivax, P. ovale, and P. malariae. Each causes a different form of the disease. P. vivax and P. ovale cause the mildest forms; P. falciparum, the severest and most deadly form.

Other Plasmodium species infect primates, rodents, birds, and lizards.
Several of these species, particularly those that infect rodents, have been used in experimental studies and for testing malaria drugs and vaccines.

To understand malaria, it is necessary to understand the life cycle of the parasite that causes it.

Plasmodium parasites undergo many stages of development, reproducing inside mosquitoes and also in the liver and red blood cells of human beings.

The multiplication of the parasites in human blood cells produces the recurrent attacks of fever and chills that are symptoms of the disease.
Symptoms of malaria generally begin from 7 to 15 days after a bite from an infectious mosquito—about the time when the red blood cells burst.

The bursting cells release wastes and toxins (poisonous substances) along with merozoites.
Fever develops as the immune system responds to the toxins in the blood.

Symptoms of malaria generally begin from 7 to 15 days after a bite from an infectious mosquito—about the time when the red blood cells burst.

The bursting cells release wastes and toxins (poisonous substances) along with merozoites.
Fever develops as the immune system responds to the toxins in the blood.

Sweating then brings the temperature down. These attacks usually leave an individual exhausted. Headaches, nausea and vomiting, and achiness may also accompany the fever and chills.
Anemia may occur as a result of the bursting and destruction of red blood cells.


Severe cases of malaria caused by P. falciparum can affect the brain and other organs, as blood cells infected with the parasite stick to the walls of tiny blood vessels and block the flow of blood and oxygen.

In the brain, the condition can develop into cerebral malaria and lead to coma and, if not treated, to death. If the kidneys are affected, kidney failure may follow.

In P. vivax and P. ovale infections, some merozoites can remain dormant (inactive) in the liver.
These merozoites periodically enter the bloodstream, triggering malaria relapses.

Malaria is difficult to diagnose based on symptoms alone.

The intermittent fever and other symptoms can vary in their duration and severity and could be caused by other illnesses.

A diagnosis of malaria is usually made by examining a sample of the patient’s blood under the microscope for the presence of malaria parasites in the red cells.

The different species of Plasmodium can be distinguished by their appearance under the microscope.
More advanced and expensive tests can detect proteins or genetic material of Plasmodium parasites in a patient’s blood.

Since the 1600s malaria has been treated with quinine, a chemical derived from the bark of the South American cinchona tree.

This drug interferes with the parasite’s development in the blood.
Chloroquine, a drug developed in the 1930s and 1940s, is more effective, safer, and cheaper than quinine.

Unfortunately, malaria parasites have developed resistance to chloroquine, rendering it useless in many parts of the world.

Resistance has also developed against these drugs, necessitating a search for new drugs and for new combinations of existing drugs.

Physicians increasingly prescribe a combination of drugs in treating malaria to improve the effectiveness of the drugs.
Prevention and control
After repeated infections, people who live in regions where malaria is prevalent develop a limited immunity to the disease.

This partial protection does not prevent them from developing malaria again, but does protect them against the most serious effects of the infection.

They generally develop a mild form of the disease that does not last long and is unlikely to be fatal.

Infants and children are especially vulnerable to malaria because they have not yet built up immunity to the parasite.

Some people have genetic traits that help them resist malaria.

Travelers who lack immunity to malaria should take precautionary measures when visiting areas where the disease is prevalent.

Such measures include using insect repellents, wearing protective clothing that covers the skin, and sleeping under mosquito nets.

Antimalarial drugs are also available as a preventive measure. However, these drugs have some serious side effects and are not suitable for everyone.

In the absence of an effective vaccine and with the rise of drug resistance, malaria prevention has had to rely on basic antimosquito measures.

Such measures include draining sites where mosquitoes lay their eggs, covering water channels, and introducing into ponds fish that feed on mosquito larvae.

Insecticide-treated bed nets have proven to be one of the most effective malaria prevention strategies.

The World Health Organization distributed bed nets to families with children under age 5 in several African countries and found that the death rate from malaria dropped by 50 to 60 percent among children in these countries.

One problem with treated bed nets has been that they lose their effectiveness over time.

Newer nets, however, retain their effectiveness for several years.

Although the nets are inexpensive, even their modest cost is beyond the means of many families in developing countries.

On the basis of this reserch work ,it is concluded that plasmodium is a parasitic protozoan that released out the sporozoit into the blood stream and is responsible for the malaria parasite.

It is recommended that one should have his blood screened of malaria parasite(mp) ,start reatment and keep the room free of mosquitoes .

Popular posts from this blog

Health and Safety Management in Health Care. Have you.Registered Yet? Class starts this Sunday-17th July, 2022.